Keg de Souza works got the best of my attention with this ‘bouncy castle-like’ structure inflated with air, colourful like my nana’s living room and amusing like a child’s 5th birthday party some place in Otara.

De Souza obviously responded to the life in Otara. Someone must have taken her to the Otara Flea Markets, as I recall it being the ‘marketing place of the Pasifika community’.

I really enjoyed her observation of the coffee table centered in the middle of this inflatable plastic table cloth structure.

De Souza referenced the stereotypical fizzy drinks. As much as I enjoy seeing this installation, I am embarrased, my family are in these observations. The response reminds me of our low-income, buy bulk/buy cheap mentality, that our parents aren’t encouraging our children and teenagers to eat and drink properly. That this fizzy drink age is acceptable? Does De Souza think this? Is this new to her? Can she relate? I’m puzzled when I see the coffee table stands with these colorful sugar filled bottles beneath it. The neon/fluorescent light gives me that ‘fake’ ‘plastic’ sense of taste. Bitter and really unsatisfying.
Is De Souza making us aware that this is what she sees? Why a Coffee table? I see a coffee table as a centre piece a focal point of the living room. Is her coffee table the center of our living quarters? Or our living situation?

If Keg De Souza were to live here would she glorify our ‘plastic-cheap-appreciation’ of colour and vibrance, inflatting our culture with deeper thought and thorough discussion? Do we read her response as a positive message that we are ‘fun’ like bouncy castles, that our personalities are ‘colourful’ and that we are beautiful people, sweet like sugar?

If Emory Douglas were to live here. Based on his mural piece I would think he understood Aotearoa well. Inspired by the social development and transition that Aotearoa have overcome and are still working towards. His response to ‘if you were to live here’ by having bright bold colours and constructive texts that suggest:
culture, diversity, people, community, unity and politics. (My own point of view)

Emory Douglas and his use of the Maori design mixed with his distinctive style of bold colours.The text used refers to his revelation about community and ‘kotahitanga’. His use of the three main and traditional colours that are used to signify Tinorangatiratanga being the focal point over a bright yellow background establishing a sense of ‘positivity’ I see Emorys response as a cultural exploration of intergrity and his understanding of Maori history. The use of three colours red, black and white tell me he pays homage, that he understands exactly how important this is to Maori.

Being the minister of culture for the Black Panther Party. He created all the visual identity for the party. Based on his political and cultural background he too understands the background of New Zealand making his works culturally, nationally and politically. Culturally by including the indigenous peoples in his works. Nationally through his use of words and Politically by his choice of colours that relate so much to the Treaty of Waitangi.

Overall, I appreciate the context of ‘how’ the two mentioned artists responded to Otara and Aotearoa.
I respect this. Keg De Souz She truly made her work be seen a reminder for the locals to see this.
I wonder if a non-art patron would view the work as I did? Would Emory Douglas works be seen as I see it? 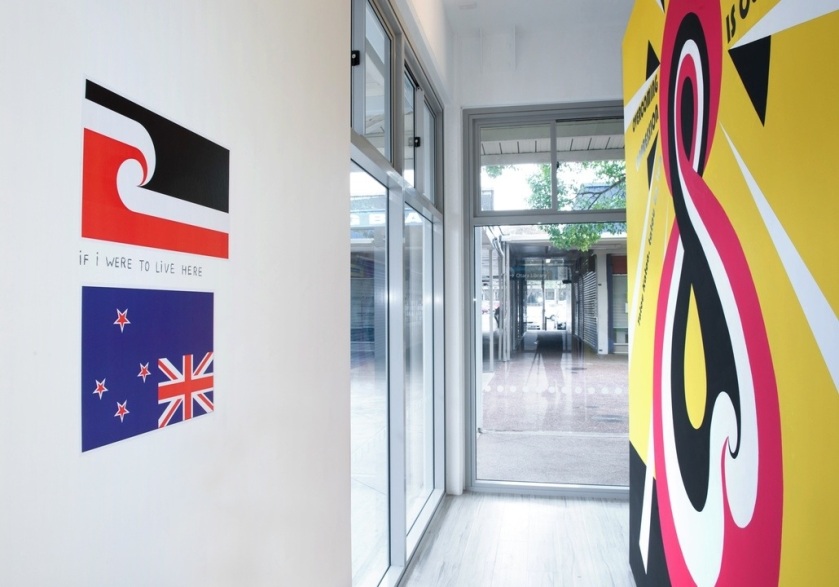