WW..D? Is an interview segment where we get to know awesome people that are a part of the creative community in New Zealand.

This week we spoke to curator Leafa Wilson aka Olga Krause, of Waikato Museum. As well as being a curator Leafa is an artist with a very multifaceted practice. Read more for What Would Leafa Do? You are the Curator of Art at Waikato Museum Te Whare Taonga o Waikato. Working within a national institution, how do you balance your own curatorial motivations with those of the institute?

I’m not sure if it is possible to balance my own curatorial motivations, and I say this purely because I work in a regional museum which has a number of criteria to which I am subject to. Museums or galleries that are funded by local government have a responsibility to serve the needs of the public (stakeholders in museum-speak) and therefore I do feel an obligation to the people to try to curate exhibitions that involve them somehow or other as well as endeavouring to make it as curatorially sound as I can. My own leanings would be more towards currency in art and presenting exhibitions that might be more globally discursive. In saying that, all art has the ability to do this, it just depends on how it is strung together by the curator. Also, there are three other offers with three other curators at the museum I work at, Tangata whenua, social history, and science, so the in-house balance between art and these other offers vacillates to accommodate as much of the community as possible, especially vital is the relationship we maintain with Tainui iwi. At times I am babysitting touring exhibitions, or curating from our collections and on the rare occasion I get to curate an exhibition that I conceived from scratch. I am a public servant so I am fine with this work balance because I do enough art writing, curating and art making in my own time to ‘keep me off the streets’ so-to-speak.

What actually are your curatorial motivations?

I suppose it’s fair to say that my motivations are often underpinned by a more catholic or universal openness, kind-of Marxist / kind-of Spivakian. I tend to consider ideas from a socio-political stance and work towards democratising art as far as I can possibly stretch it without it losing its potency. Of course more critical thinkers might consider this futile and unnecessary because art has its own voice, but, I don’t really care. It’s just who I am. I am possibly the first Polynesian woman to have the role of art curator in a museum institution. Not Pacific art, or Maori art… but the fine arts. I see this as a small triumph for the marginalised, and so I try never to see this as being about myself but about representing the suppressed voices within the dominion of Western art. Sounds very idealistic but it’s a deeply held belief of mine. I am black (Samoan), I am a woman: My Samoan worldview can’t help but be a tacit voice in my curatorial practice. In this role, I have the power to include many voices not just that which is churned out by the mainstream. My very presence challenges the role of what was the stronghold of the ‘white male’ which has been the case since art curation began up until the late 1970s. In fairness, the institution of the museum and gallery falls within the cultural construct of the Western world, so it was the accepted norm (crudely speaking). None-the-less, this is where I am today.

As well being a curator you have a pretty dynamic multimedia practice of your own. How do your curatorial and artistic practices affect each other?

Curating and making art I believe come from the same creative rationale. One isn’t truly separate from the other. Curating artists’ works is just another kind of conceptual creation and about relationships between the works and the world and how I am afforded the privilege of making their works accessible to the viewer. Ultimately, the same rationale for my own work occurs, the only difference would be that my curatorial practice is public, whereas my art practice, while it is performed or display in public, will never fully disclose the private meta-narratives at play.

Do they feed into each other or are they separate?

I try to keep my curatorial work separated from my private art practice. Often-times, my role as a curator involves much more of a researcher / pragmatic approach and just doesn’t really come anywhere near the work I make as an artist.

Always, we are the body corporate and that’s how in my head I approach these two names that signify me. Leafa Wilson. I am married to Craig Wilson, so that’s a working/ married name… but I was born Olga Hedwig Janice Krause – it’s still me… no changes there. So I will often use Leafa Wilson’s name as the curator for work because that’s how I am known. (For the record, I grew up being called Janice at home and at school, except when it came to being addressed in Samoan, then I was called Leafa by my parents, my Gramps who lived with us and our au lotu.) If I am curating or writing outside of work or exhibiting, I often use my birth name because it does honour my late father Charles aka Sale Krause who died in 1993. It’s a sentimental connection to him as well as part of my practice to undermine the hegemonic reading of the body that doesn’t equate my black body with my German names. (See ich heisse Olga Krause, Deutsche künstlerin) 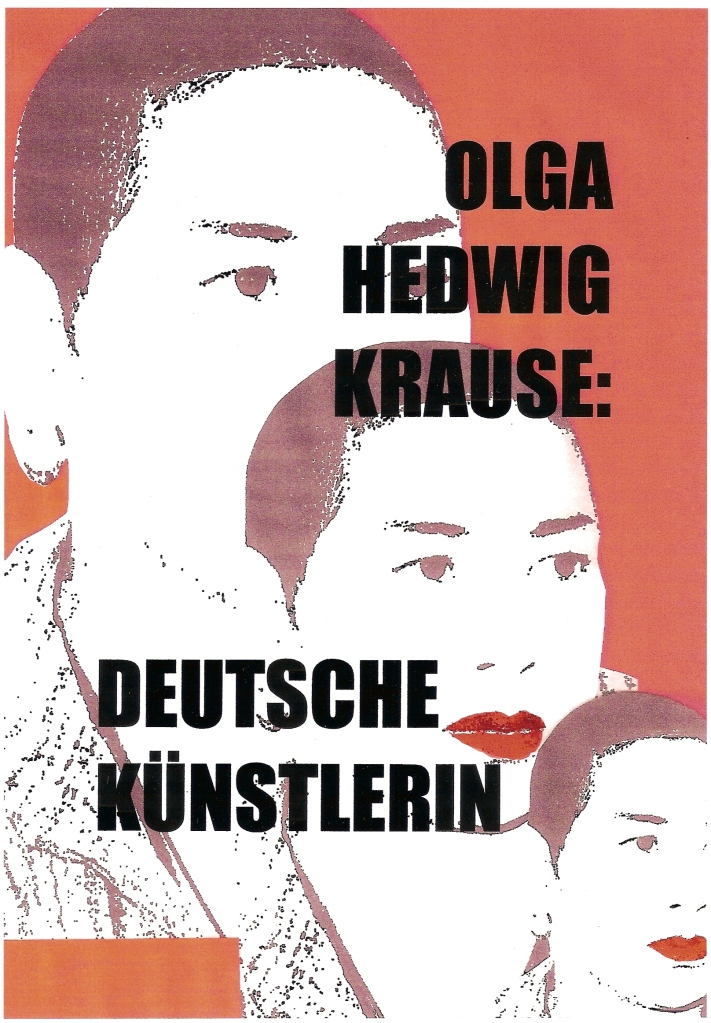 Ich heisse Olga Hedwig Krause, Deutsche Kuenstlerin – shown at Burke Museum, Seattle, Griffith University, Melbourne, 2005.
It was shown as part of an international exhibition by historians and anthropologists into the German diaspora throughout the pacific titled Narrating the Pacific, National Socialism in Oceania, 2005, Seattle University. USA.

You often perform in tandem with your daughter. How integral is this family collaboration to your work?

Interesting, I’ve never really thought about it. I guess my daughter Faith and at times Olive, my other daughter, have always just gone along with my art projects in the same way as a child helps out their parents on the farm… so it hasn’t really come under scrutiny for either of us. But I guess the difference now is that Faith is a writer and performer as an adult and therefore is consciously collaborating in that she brings her own critical faculty to the practice of performance art rather than as a participant in it as she used to be when she was younger. The first work she and I did was when she was 11, and I made her pose as a taupou for a postcard invitation to my exhibition Savage sight/ Savage site, at Archill Gallery in 2000. I do like the honesty that comes with this relationship even it means disagreement at times.

Lastly what words of advice do you have for other young artists and curators?