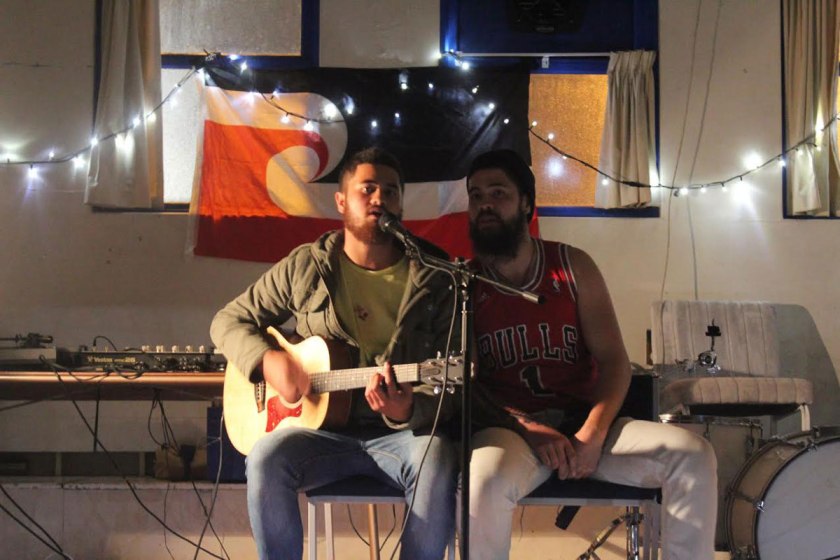 As the year gets well under way, I’d like to take a bit of space to briefly and personally acknowledge ELECTIONS 2014, an exhibition and series of events which took place at RM, 307 Karangahape Road, from the 3rd – 20th of September 2014.

Leading up to September 20, RM was flooded with a sustained and memorable energy that doesn’t usually flow so freely in spaces kept for art. Organisers Eleanor Cooper and Ella Grace McPherson-Newton tactfully seized upon the mood and momentum of the general election, bringing together a huge number of energetic and thoughtful people who were perhaps both doggedly optimistic as well as hopelessly realistic about the repercussions of our current political situation.

For the duration of the show, RM’s archive room became a broadcasting studio for Radio NFA (No Fixed Abode), a group whose simple yet powerfully enacted motto is ‘homeless doesn’t mean hopeless’. On opening night, NFA members and friends welcomed everyone with a mihi and waiata before the space filled with the joyful sounds of DJ Tuafale Tanoa’i (aka Linda T). Asians for ACT dished up instantly recognisable noodles and BJ’s seemingly bottomless soup kept everyone well fed. Artworks on the walls, on the table, hanging from the ceiling and outside in Samoa House Lane included contributions from K Rd locals Phil Tu’u and David Merritt.

In the days following, Aindriú Macfehin led a discussion imagining life after capitalism; Daniela Reyes eloquently introduced and screened the film No, which told the story of the campaign that harnessed marketing and advertising tactics to overthrow the Pinochet regime in Chile; a realistically resigned lesson in tactical voting from Jonathan King followed the political debate. And on election night itself, live music was cast alongside coverage of the distressing situation as it unfolded on national television.

The ‘political debate’, chaired by Nadia Abu Shanab with guest contributors John Darroch, Marcus Coverdale, Sue Bradford and everyone who came along, was a particularly timely conversation – one that should happen more often in a public setting. The discussion was framed around the question: Can voting contribute to longer term goals of revolutionary politics? and throughout the evening the three guests all shared their extensive knowledge and experiences in fighting and standing up for what they believe in, with plenty of others contributing and responding with questions and positions.

Articulate, well versed as well as less vocal but by no means less passionate people who have been interrogating and enacting a commitment to justice for years, openly shared and debated their ideas. Thoughts that were expressed ranged from the need for a total re-think of the Kiwi quarter acre dream, to how Te Tiriti has been so far from adequately honoured, to voting being the first step to psychologically buying into the parliamentary system (being more of a barrier to systemic change rather than a platform for creating it), and how a group such as those of us gathered at the debate might actually bring about political change.

John’s unambiguous example was that if everyone in the room voted, we would have no impact,  versus us all working for political parties, which may sway the result by up to a couple of percent, versus changing the political discourse if we were all to say fuck this system and decided that our goal was to combat the ideology of neoliberalism by making changes to how we lead our lives – how we take action outside of parliament to influence the political system.

The discussion came to a close with the point that the space we were in (never mind whether artist-run or not) was a gallery, with the sentiment that what usually happens here is not often considered to be directly talking about or affecting change.

In the weeks preceding the election there was a wonderful turn towards neighbouring galleries hosting and initiating shows that insisted on community events or action.* I’d like to think that ELECTIONS 2014 brought together the activist and artists’ communities, clearly expressing that politics isn’t just in parliament and that it can’t just be left up to the hardcore group of stone throwers to fight and work towards some kind of justice within our communities. As ST PAUL St Research Fellow Sakiko Sugawa suggested earlier last year, artists and activists are such a compatible and necessary pairing. While this point is surely clear to many, the way in which it seems to have been put into practice since she was here has been rather revelatory to me.

During a group conversation about how people felt they were acting against capitalism, I was warily able to say that through my involvement as one of the co-directors of RM, I was part of an anti-capitalist organisation. While this has never been directly discussed or disclosed, I like to think that such an attitude affects everything RM tries to do. Very often, RM operates as a perceived ‘white cube’, but is always thinking about how and where we can be useful and fill gaps that aren’t being catered for in our community.

RM (previously rm3, rm212, rm401 and rm103) has been such a constant in Auckland, involving so many people since its beginnings in the nineties. One of the ways in which we can create radical change, as Sue put forward, is to build our own systems and create spaces inside the rotten shell of capitalism, to demonstrate in our own lives how we want to live.

With ELECTIONS 2014, as with so many of the shows RM has been part of, new friends were made and in turn, new ways of thinking and doing have been shared. While contradictions and difficulties will for sure remain, this exhibition was an encouraging reminder of the things that we can do.

I am so glad that with ELECTIONS 2014 Ella Grace and Eleanor created a space to directly address politics. No alluding, nor highfaluting, but a thoughtfully and sensitively organised series of happenings full of urgency and questions which will no doubt stay vividly in the minds of the many who were present.

*We Will Work With You preceded earlier in the year by This Home Is Occupied at ST PAUL St Gallery; W e l c o m e at ARTSPACE; Night School at Fuzzy Vibes; and slightly further afield, and a bit later Heraldry of Presence at Fresh Gallery.