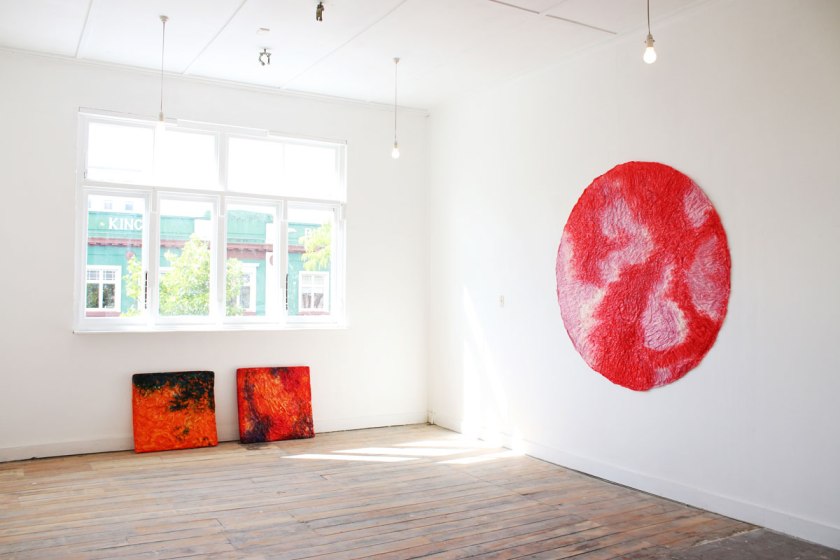 Sometimes it is the art, sometimes the titles and then again at other times it’s the name of the show itself that grabs the headlines. In Chelsea Pascoe’s case, showing at the Casbah in Hamilton, it’s definitely the latter. Called Hard Candy, the nomenclature couldn’t come with more sexual innuendo if it tried. And just in case you might have missed the references, on the handout sheet, reverse side, there is a handy etymological breakdown of all the various allusions gathered together in this one voluptuous and innocently carnal phrase. The unpacking of Hard Candy begins first with the harmless literal thing in itself – a boiled sugar sweet (of which there were colourful samples to imbibe at the opening) to the more esoteric – an under-aged attractive gullible girl, to the final piece de resistance where all is laid bare – an erect penis, because, and I quote, “bitches like to suck on it as if it were candy.” Gulp!

That the art itself, made up of tissue paper might cause further scatological comment would be pushing the playfulness a bit far.

What the works in fact display is a certain Pop Art lilt: colourful, bright, light, airy, and existing somewhere between a painting and a sculpture. These hybrids, made of condensed tissue, pigment and polyurethane, come in a variety of shapes, configurations and sizes. Lolita is a huge round circular construction hanging off the wall like some giant pink bloom. Sweetmeats are thick multi-layered squares, fat as “Pink Batts” and positioned upright on the gallery floor while Jawbreaker consists of small crunched up pieces of tissue attached to the wall in clusters, arranged in slightly random formats.

All these abstract installations employ the colour field trope reworked for the postmodern aesthetic. In a sense it becomes a scenario of Pop Art meets abstraction, an engagement with the practice of amalgam that consciously defies traditional categories, a crossbreed that embraces the plural.

The use of banal material for these joyful pieces that simply celebrate colour and form is a further strategy challenging the ordinary and time-honoured sculptural conventions.

Chelsea Pascoe is a diminutive Pop Art diva with a twist. Even her name conjures with the Warhol factory crowd, recalling the film, Chelsea Girls, and evoking Warhol’s prodigy, Candy Darling. But her credentials speak for themselves, an MA graduate from Wintec, 2015, revelling in the materiality of tissue, the most fragile of substances made strong, durable, playful, textural and visceral in a way that reminds one of Rohan Wealleans.

Her latest fabrication, affectionately called “Mothership” (not on exhibit) reveals itself as the next evolutionary artistic step in an ongoing production that sees tissue taken to another level – a bulbous landscape of moulded, globular constructions consisting of large 3D forms that bubble up from the surface in strange amoebic like swellings. Tissue never looked so threatening or less hard candy orientated.