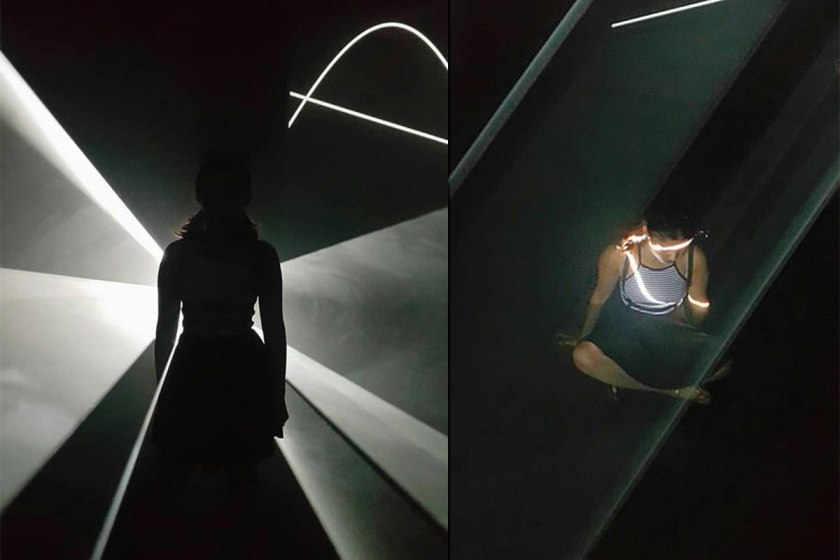 British artist, Anthony McCall, began his light projections in 1973 during cinematic developments of the 1970s. As an art history student, I have approached contemporary art with a narrow-minded perspective. Light has never appealed to me as an art medium, yet, I found myself intrigued by McCall’s exhibit at Trish Clark Gallery.

McCall’s Face to Face IV utilised two projectors in a dark room which casted simple morphed compositions of bright white lines upon suspended screens. The manner in which he used light created an ambient haze, as if the rays were spectral. The swirling line versus the solid line projection emphasised brilliantly beautiful flecks of dust which danced between the light and created an immersive experience. The cavernous room became a part of the work, interacting as a spectator to the projections. Interestingly, although the room was flooded with light the space still remained quite dark, underlining the sculptural solidarity of the projections. Despite light being an immaterial thing, McCall accesses the sculptural quality light can have given the right space and form. Additionally, the viewer had the ability to manipulate the light using their own bodily movement. I ran through it, under it and even sat in it, instilling feelings of freedom, energy and artistic contribution. The intersection of one’s self with the projections modifies the meaning of the work with each individual’s expansion, contraction or unfolding of light.

Two projections were displayed face to face, reminiscent of a cowboy shootout. By introducing a third “shooter”, the viewer, competes with the two different projections whereby changes to the light are dependent on the viewer’s interaction with it. McCall’s additional cinematographic references to film noir, backlighting and silhouette are comparably compelling. Film noir is used through the stark contrast of white light against black surfaces. Backlighting occurs when viewers stand in the light which moulds around their body and creates a silhouette of the viewer. The contrast, backlighting and silhouette that is created are key components to the “shock factor” and hypnotising feeling upon entering the room. The amalgamation of art and film practices blurs my notions of both.

McCall’s work has challenged my understanding of art, as my usual interests lie in the Renaissance period. His use of light as a medium draws the viewer’s attention towards the projector’s beam as opposed to the projected image on the wall space. The beam focusses on the “drawing” aspect of light by creating suspended “lines” and “swirls” of light which is then “drawn” onto the screen. Additionally, I am confronted by my understanding of sculpture. Sculpture is a solid three-dimensional form which sits on top of a pedestal, floor space or in a niche of a building. Yet, McCall’s use of light suspends “solid” “three-dimensional” beams of light which can be touched without any solidarity being present.

McCall’s work is among the ever-changing conversation developed through contemporary art practice. His work has me questioning what contemporary art can and has become – obscure and enigmatic.