What do you do with an empty pink gallery space, (Pilot, in Hamilton) courtesy of a previous exhibition, called, Hey, Cutie! There’s only one thing you can do and that’s make love in it. It cries out for such employment. And that’s what artist, Lauren Burrow did. Well, almost. By proxy.

What you see when you walk into the gallery painted in three shades of gorgeous pink, is nothing. You’re simply surrounded in soft cherry reds: flushed, rosy, glowing and blushing: and then you hear, if you listen carefully, the slightly muffled voice of the artist on a recording reciting her poem, while at the same time involving herself in self-pleasure.

The poem is entitled, Full Body Msg (Massage) and was recorded during the artist’s residency at the physics room, Christchurch.  It lasts for 4 minutes 30 seconds and plays on loop.

Here are some of the lines randomly collated from the poem.

Things are more real if you say them out loud. Slow motion water falling mirror cage. Keep on going. When I was ten I named my puppy girl god. Aphrodite the dog of love. My poetry is not parliamentary. The reason I love women is because they are all all women and none of them. Holy holy holy. To be touched to be held to hold high, to be touched by the lean power of even half a Beyonce thigh. Now the music is slow, coming and going. The coming never stops.

There is only one small object in the gallery space, easily overlooked and lying a little lonely and forlorn on the floor. It’s a brass door handle inscribed with the words, “Spring Rhythm.” The handle, one is made to think, belongs to the invisible door that leads to the palace of bliss, ecstasy and new beginnings. Bloom and abundance lie on the other side of the egress. Pick up the handle. It is the secret key to the land of pink promise, a land of audio hymns and love songs to Sappho in a little cathedral of Eros, erected in the name of the goddess, Aphrodite. The doorway opens onto a stairway to heaven. Holy Holy Holy the artist chants, like the poet Blake who saw eternity in a grain of sand and who preached that the lust of the goat was the bounty of God. God is dead but Aphrodite is alive. The coming never ends.

In the adjacent gallery is the work of three other women artists and a publication with a pink cover smelling of perfume. The title to the exhibition is “Loverdose Tattoo” and refers to the name of a perfume artist Evangeline Riddiford Graham discovered as she travelled around New York City sampling various fragrances in a variety of department stores. “I went to Bloomingdale’s on Saturday at midday,” she writes. One might call Graham’s work a performance piece while others might just call it shopping. But then the text and the intent is what makes it other than something banal.

What is the intention?  It is an exploration of the tourist or travel writer reacting to places, bodies, sensations and places.  It is the first half of an exchange between Pilot Gallery and North Projects, curated by Grace Ryder and Sophie Davis.

Reading the whole of Graham’s text is like engaging with a postmodern novel, a slice of life that goes nowhere – a strange esoteric other-worldly world that someone like Warhol would have loved, engaged with colognes and the “wafty perfume lady”.

The next artist, Vanessa Preston, presents five sheets of A0 inkjet prints called, side by side on your heart (imagined postcards from Japan). These are laid out flat on the gallery floor and involve a mix of text-based observations from a recent trip to Japan that range from the commonplace to the more poetic. In Kyoto comes a line: “Slithering through the city the river is dark green.” Flying to Auckland, one entry records, “Ridley Scott’s, Alien, bright and harrowing. This Boeing 787-9 is dim and almost comforting.” Then follows the arresting poetic phrase: “The earth is hurtling (dragging itself through space).” At Hong Kong Airport a more banal entry: “We move back in time to get a cheaper flight back.” And Japan late evening, there’s a discussion of the harmony between utopia and dystopia.

These collaged observations speak to the discontinuity inherent in modern life. Travel makes life more and less real. It provides for heightened sensitivity, dream-like perception, the equivalent of out-of-body experiences comingled with the prosaic. Such dislocation places the traveller on a slide rule that moves at speed from the commonplace to the erudite and enlightened. Real and surreal jostle for position while the metaphysical mingles with the mundane, sitting each side of the heart.

The last work comprises three caps, worn by the ones who illegally come up to you at a red light and wash your car window whether it needs it or not and regardless of whether you ask. The caps were purchased by artists, Eleanor Cooper, Melanie Kung and Evangeline Graham, while visiting Hamilton, from the owners who were at their prohibited work. They hang on the gallery wall like trophies, testament to the interaction with place: Victoria Street, Ti Rakau Drive and Reeves Road, but witness also to something far from pretty or scented; the antithesis of Venus in blue jeans.

The text associated with the caps comes in two parts in the pink publication. The first is a copy of an article from the Waikato Times outlining the trial of one Alvin Wainohu, aged 33, who explains to the judge that he has 10 kids and doesn’t get enough money from the government to feed them. The second part of the text includes 41 comments in response to the article. The best deserves to be printed here in full. It comes from Sarah-lee.

Sorry Mr Wainohu but we had the displeasure of being your neighbour for 8 months. In that time you’ve partied almost every benefit day. Had to be hauled away for domestic violence several times. Let your young teens drink and get high as well as threaten my house because you’re concubine was arrested recently after another party. The council has warned you about your unsanitary backyard and your stereo has been seized several times as well. But really the saddest fact? I’ve seen you’re children hungry. The plus side of all this … I’m moving this weekend.

The exhibition is perhaps a reference to a land with plenty of lovers; lovers of the body, of places, of smells in different places, lovers of words in interaction with the body and the sampling of the world where the coming is perpetual.

This show at Pilot, Gallery 1 and 2 in Hamilton, is a deceptively simple exhibition that incorporates intriguing complexities that take one to places beyond surface encounter.

In one gallery, Aphrodite presides with the artist travelling (Jilling off) en route to the land of the Lotus Eaters, that sacred, mythical yet actual site, visited by way of the body. In the second gallery the fragrance of the goddess lingers (lavender, sea spray, metropolitan hustle, sexy) with the gallery floor strewn with pine needles, symbol of love and fertility, together with a few unassuming hair pins. 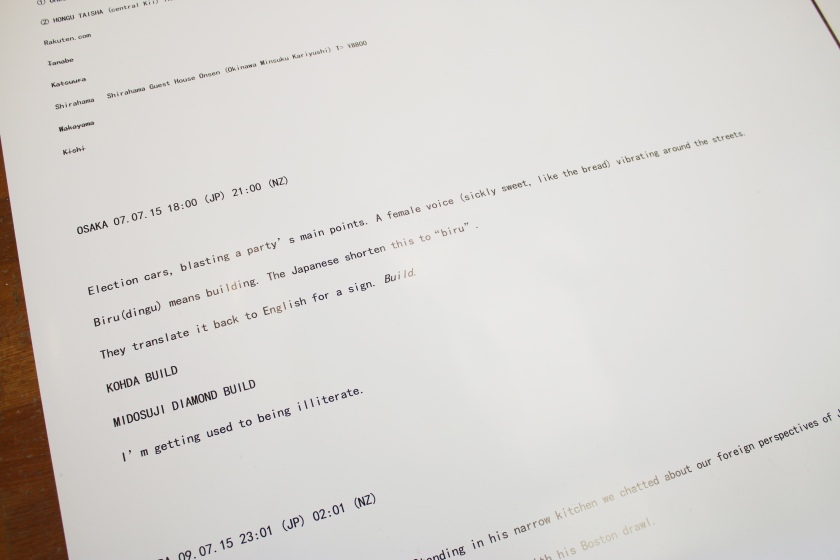 Vanessa Preston, I’ve closed my eyes enough so all I can see is the white road markings flick past, 5xA0 inkjet prints