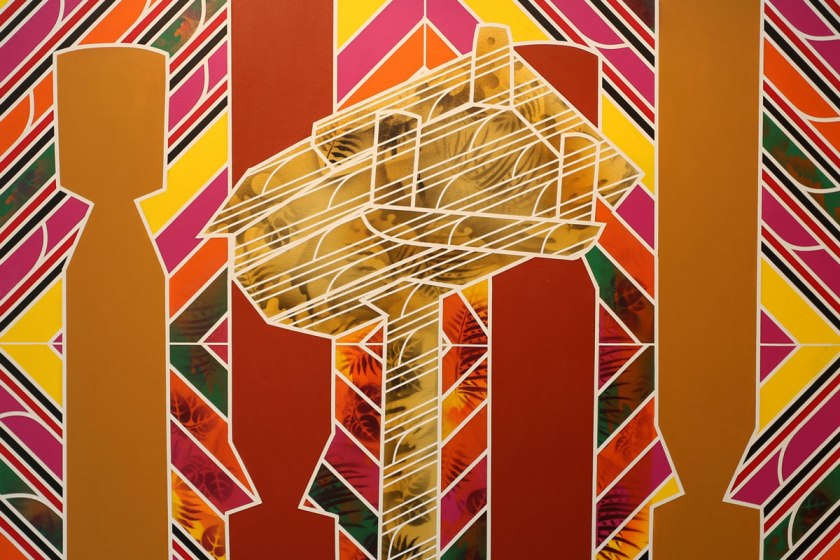 There is so much art activity going on at the moment in the Waikato that this review, of necessity, has turned into a compilation album.

The Wallace Gallery in Morrinsville has become the hot place to be and be seen, and recently a group show entitled, Between the Lines, show-cased the work of artist, Rose Meyer. Her unique process of mark making involved the use of a device that creates an automatist line Max Ernst would be proud of.

Her trick to producing a random series of lines on paper – a chaos of swarming marks or a bird’s nest of linear configurations that fill up an A3 size page, involves an ingenious methodology.

She built a little ‘tray’ on wheels, punched a hole in the middle through which she fixes a pen. This device is then placed inside an A3 box with matching size paper and then the box is taken for a ride; literally. The back seat of a car is ideal, or, to up the ante, the box is sometimes posted through the mail. The resultant journey with all its twists and turns is seismically tracked and recorded, then mounted for display in the gallery inside the opened box which acts as a framing device.

This process aptly reflects what Paul Klee’s once said the practice of art was – “Taking a line for a walk.” Meyer’s sprawling marks become the ley lines that document the journey of our lives, like the ancient tracks our ancestors once made.

In the same show, Justine Giles takes marking making with ink and watercolour to photorealist heights so that the simulation of a postcard or page of found text is replicated in such immaculate detail that the distinction between the artefact and art is obliterated. There is nothing here “between the lines”. Reality and simulation are one.

That same play between the observed world and its copy (two degrees of illusion in Plato’s economy) is reworked in the art of Dean Tercel. He takes a deliberately blurred photograph of his subject and reproduces the image in charcoal on paper; a recasting of something the impressionists were playing with 150 years ago.

Blurred lines appear again in a show at Ramp Gallery that sports a long and involved title: It Sounds Like I Missed Out On A Lot While Standing In The Middle Of The Cloud. Curated by Wallace Gallery director, Justin Morgan, it included one of the last works by Len Lye. Entitled Particles in Space, (1980), it employs his famous scratch markings on celluloid film strip. The effect is played on screen to the accompaniment of upbeat jaunty music. These moving truncated lines and ciphers seemed to dance, weave and bob to the score, coming into and out of existence like light trails left in the dark by the rapid movement of atoms.

A Rothoesque darkness is captured in the same show by Diane Scott in her work, The Curtain, where layers of acrylic and enamel on aluminium, backlit, give the black/blue depth an enigmatic resonance.

While Scott’s work reverberates with Lye on one level, artist James R Ford in Tiddlywink in the Lens echoes Lye at another. His video piece that renders the momentary flung movement of a plastic disc on the screen for a split second, embodies the illusive nature of reality; that which exists “between”.

At Skinroom, the focus is on handmade paper as a medium. Entitled, Mash, a reference to the process of making, artist Chris Singh, in a work called, Periodic Table, sees the paper become a multitude of small canvases that serve as a base for simple graphic lines in black paint – abstract jottings that represent symbolic representations of the elements.

Mason Holloway uses his handmade paper for painting streetscapes that display a sharp sci-fi touch, coloured red, evidencing a strong graphic comic strip design, while Mark Peters does intriguing 3D repetitive jigsaw patterns using thick handmade paper cut to precision with a laser. Alongside these, Delaney Parker plays with the fusion of divergent materials, juxtaposing strips of wood bound together with paper to create a nice frisson between contrary elements. 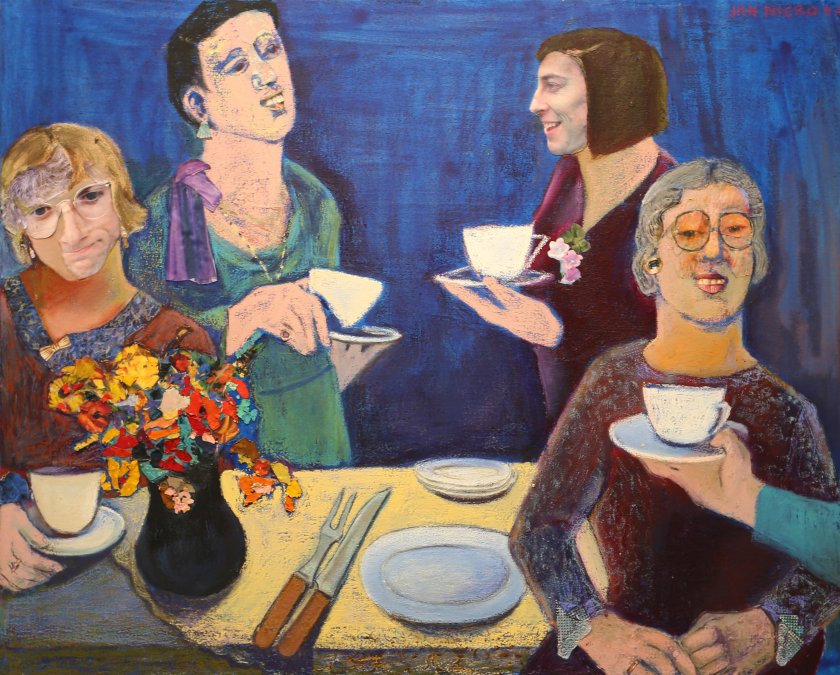 Collage, of course, goes back a long way and it was surprisingly evidenced in the work of Jan Nigro at Aesthete recently in a show of Waikato Women Artists. Her portraits subtlety incorporated found elements, cut from magazines, which she pasted onto her paintings – a ring on a finger, part of a face, etc. One had to look closely to observe the collage itself. The show also featured more contemporary local artists like Zena Elliott with her high-coloured abstract reworking of Maori motifs and Sarah Munro, making a name for herself in New York, with her finely finished and slightly impressionistic figures in interiors.

A one night stand by Priscilla McIntosh and Alex John K at OLGA, in a show called, Second Wind, saw the former work her portrait magic with a Rita Angus style figure placed in relation to a table along which a portrayal of David Hockney lay, tablecloth-like. Clever. The latter worked up a Peter Snell portrait through a repetitive process of drawing, screen printing and painting. The resultant image was then cut out and pasted on an old antique mirror, complete with chain, to conjure the feel of famous New Zealand sportsmen hung up clubrooms up and down the country. An iconic figure is thus treated in a distinctive retro format that provided both edge and charm simultaneously.